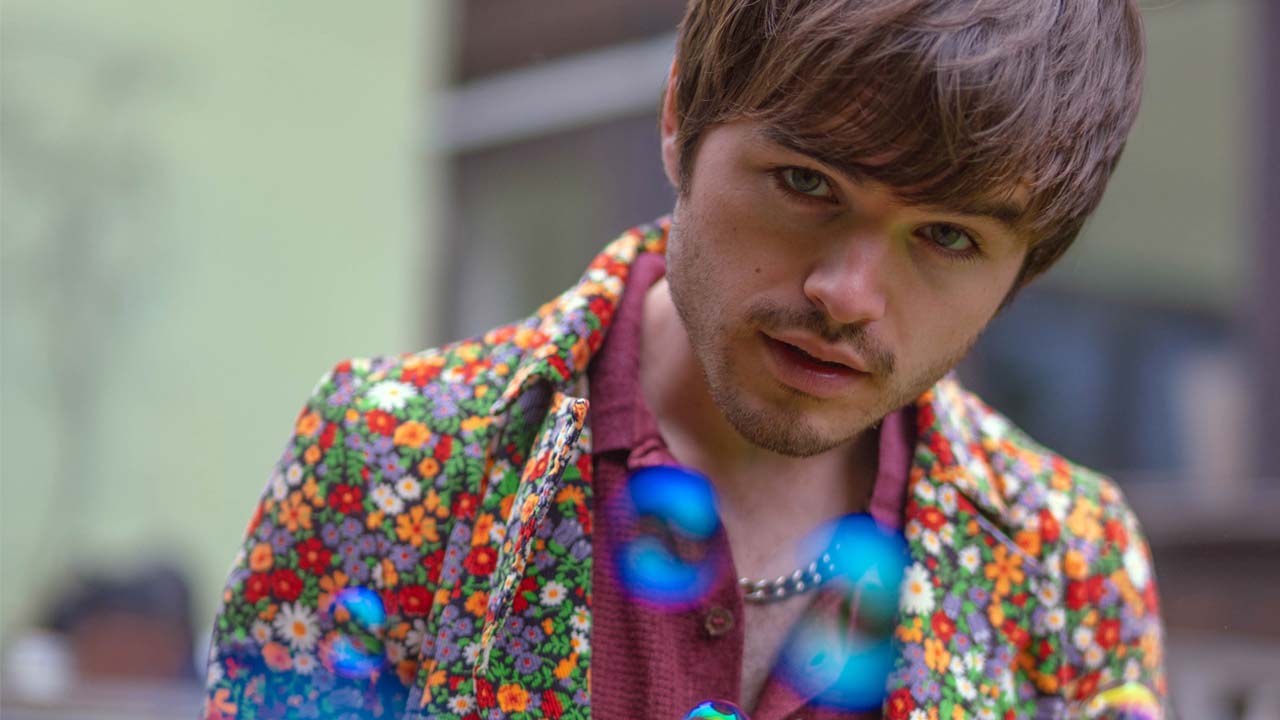 24 Nov INTERVIEW – Josh McClorey on going solo after The Strypes

Following The Strypes’ separation back in 2018, Josh McClorey, who played guitar in the band, took some time to work on himself and think about what kind of solo career he wanted. In this interview, he talks about The Strypes era, his take on music and what he plans to do in the future.

I’m really good, thanks ! I’m in Brighton, I’m just back home. And I’ve got like a day off, I’m playing bass for Paul Weller last minute, and we’re just in rehearsals. So I’ve got a day off and I got down here quite late last night after rehearsals. So I’m really good, I’m just busy and doing lots of different things and getting busy to kind of release the next batch of music which is coming soon, which is coming in the next month or so.

So we’re gonna start by digging a bit into the past .. Can you tell us why you decided to go solo after The Strypes ? What happened ? Is it something you always wanted to do or did it just happen ?

I think I always knew I’d end up making my own music at some point. And we had a really good run, and we’ve done it for like 8 years and we all thought that it was time to kind of move on to do other things, so it was all good but yeah I’ve been kind of thinking about doing this for quite a while, maybe 5-6 years and I’ve just sort of started writing stuffs … But I mean I was always writing, you know … I just started writing with a project specifically in mind like four years ago, and then it’s just gone from there and it’s been really fun, it’s been like I’m starting again. Which has been amazing, it’s been really fun. I’ve learnt a lot of stuff from the band and I’ve also got to go into new fresh things as well so yeah, it’s been great, I’ve been loving it.

Do you find going solo difficult or different from your experience in a band ?

Yeah, it’s a lot more responsibility, but also you know, you’re calling all the shots and you’re creatively doing everything. It’s a different thing, I don’t know if it’s better or worse, it’s just that you’re in a different position. I’ve enjoyed both things, I’ve enjoyed being a part of the band, that’s really good and I’ve been lucky. With a couple of different people over the last few years, I started doing my own music, and being a part of the band is a really valuable thing. But for the music that I’m making, I just kind of always knew that I’d go and do something myself at some point so, yeah, it’s exciting to be at the start of it.

Your first two EPs, “Blessings” and “Sipping Bucky” are really different. Can you tell us what was your intention with each one ?

Yeah, I mean I guess it’s sort of … None of it really sounds different to me, I guess there’s some difference in terms of … I guess with the « Sipping Bucky » EP, obviously there were the two live tracks from the studio so it’s always gonna be a little more band-leaning. And I think I’ve just leaned into the guitar a little bit more. When I first started making stuff, I was kind of actively trying to see what would happen if I didn’t really play the guitar. Because I’m really into a lot of different things, not just guitar music. I kind of wanted to experiment and see where that went. And I ended up just really liking those songs themselves. I guess that the differences in the two EPs would be that the roles are slightly different where, with the first EP, I didn’t fully produce everything myself. I’ve worked with a friend who’s really really sick, he’s really good. But with the « Bucky » EP, those other tracks are just me in my shed, like in my room, on my own. I feel it’s probably closer to where my stuff is heading, especially with this new EP that’s coming out next month. I’ve leaned a lot more into the guitar, I’ve also sort of taken the reins with production, a lot more. To me, it’s all the same, because it’s my music so it just sounds like my songs, I’m not really that good at self-analyzing … ?

Since you’re working on all that, are you planning on releasing an album ? Do you think you’ll do some shows in France ?

I’m dying to come back to France ! I haven’t been in like two years. I haven’t been since before the pandemic. But yeah, the plan is, next year hopefully is to get properly out on the road. I think with the shows being so uncertains, it was hard to book a lot of shows. I’m going into the studio in December, and will talk to the band about making a record, I don’t know if it will make a full album, but I’m definitely gonna release something. Next release is in December, and then I’m just gonna see how it goes, how I’m feeling at the time. I have so many songs, and it’s just how I put them out and in what format and stuff, but I’m definitely gonna have another EP and possibly an album after that. But I’ll just have to see how next year goes, and what I’m doing and where it lends.

Can you tell us more about your upcoming EP ?

Yeah, it’s like 6 tracks but it all runs as one track, as one piece. So it doesn’t really stop, it’s sort of split-up. You just have to play it from start to finish, kind of like a mixtape. I’ve been listening to a lot of Stevie Wonder and a lot of Prince, it’s influenced by stuff like that but also by King Princess … I did a lot of it. Basically, it took me sort of the last year to do, I did it in a bunch of different houses, I didn’t do any of it in a studio. It was just like different rooms in my house, and sort of tried to get really into production. It’s the first time I’ve consciously spent a very long time on production and sort of getting better at that and figuring out things that I, in the past, wouldn’t have really done. I wouldn’t have had the knowledge but I also wouldn’t have had the attitude to sort of just sit with it and figure out exactly what I wanted to do sonically. This definitely feels like the most… It’s the one I’ve been the most excited about, by a mile, for people to hear. I’m really excited for people to listen to it, to put it out there and see what happens with it. There’s a lot of folk guitar, I’ve very heavily leaned into the guitar again. Which is good because I think, being in a situation, being in a band and making guitar music for like seven to eight years, that the stuff that I was writing, not that it didn’t lent into the guitar, but like the stuff I’ve said earlier, I’ve just made a conscious effort to see what would happen if I didn’t play the guitar. And then I’ve just kind of come back around full circle and I’m playing the guitar again. I’m enjoying it ! Because it’s what I’ve been doing since I’m really really young, it was kind of my first instrument. Yeah, I’m enjoying that and I’m enjoying how much guitar is on the new thing.

We actually prefer the second EP with more guitar solos …

Yeah, I know, I’ve read your review ! (laughs) I get that. The thing is, you know, I’m always going to experiment with stuff and move things forward with it. I think that’s kind of the purpose of making music, it’s to try and get outside of your comfort zone. And that for me, at that point … Also, to be honest, it was kind of a huge thing to just try and sing for the first time, properly. Because I had never really thought of myself as like a lead singer, so I’ve been focusing on that for the past year and a half, two years. It’s like “how do folks do this?” I don’t know how to sing that. I’ve spent a lot of time on that until I felt comfortable enough to play with my voice. So yeah, it’s just been experiments and learning and stuff all the time. It’s been a really fun process !

You told us what you’re listening to at the moment, but can you tell us more about your influences?

What am I listening to? I find myself listening to so much Stevie Wonder, not really any other artist… I kind of get obsessed with one or two artists and then don’t listen to anybody else for like six months… Yeah I’ve been listening to that, a lot of Hotter Than July (Stevie Wonder’s album), I still listen to loads of Prince… I’m really liking Kamal., he’s a new artist from London, I f*cking really like what he’s doing! I really, really love Wet Leg, they’re amazing! I like Dylan Fraser, I think he’s really cool. Yeah, there’s some really good stuff out there ! And then there’s some amazing Irish stuff as well … Actually my favourite artist at the moment, she’s also a friend of mine, her name is CMAT, she’s this artist from Dublin. Her lyrics are insane, her lyrics are amazing. And the melodies are amazing. And it annoys me because I hate giving her confidence but yeah, she’s kind of my favourite person that’s out right now. If you had to check anything out, she’s got a song called “No more Virgos” that she just put out and that I just love. But then I’m always listening to the same five bands from the 60s as well, like I’m always listening to The Beatles or Animals ! And you, know I’m always listening to AC/DC as well.

Are you waiting on the release of an album in particular, before the end of the year?

Well, I’ve heard Kendrick is supposed to drop this year, but I don’t know when it is actually gonna drop. That’s kind of the thing I’ve been most excited about! There’s other stuff that’s supposed to be coming out this year but I don’t know when that’ll happen. There is also an A$AP Rocky album coming this year. Yeah, those two really are the ones I’m most excited about, in terms of records coming out. But who knows what’s gonna come out this year, you never really know it with hip-hop !

Do you think you’ll play any festivals in France?

Yeah, well we haven’t booked anything yet and I don’t know what will necessarily happen this summer or the summer that’s coming. Just because a lot of those festivals have been booked already. If I don’t get to do festivals next year in France, it will definitely be the year after. But I’m definitely gonna do some small headline things next year. If I could get to Paris, it would be amazing. I’ve always had a sick time there, the crowds have always been great, I just fucking love being in Paris, I love all of it ! I hope we can get out next year.

Thanks you ! Maybe we’ll see you next year and listen to your new EP !

Yeah of course, I’ll send it to you ! I appreciate the support, thanks guys !