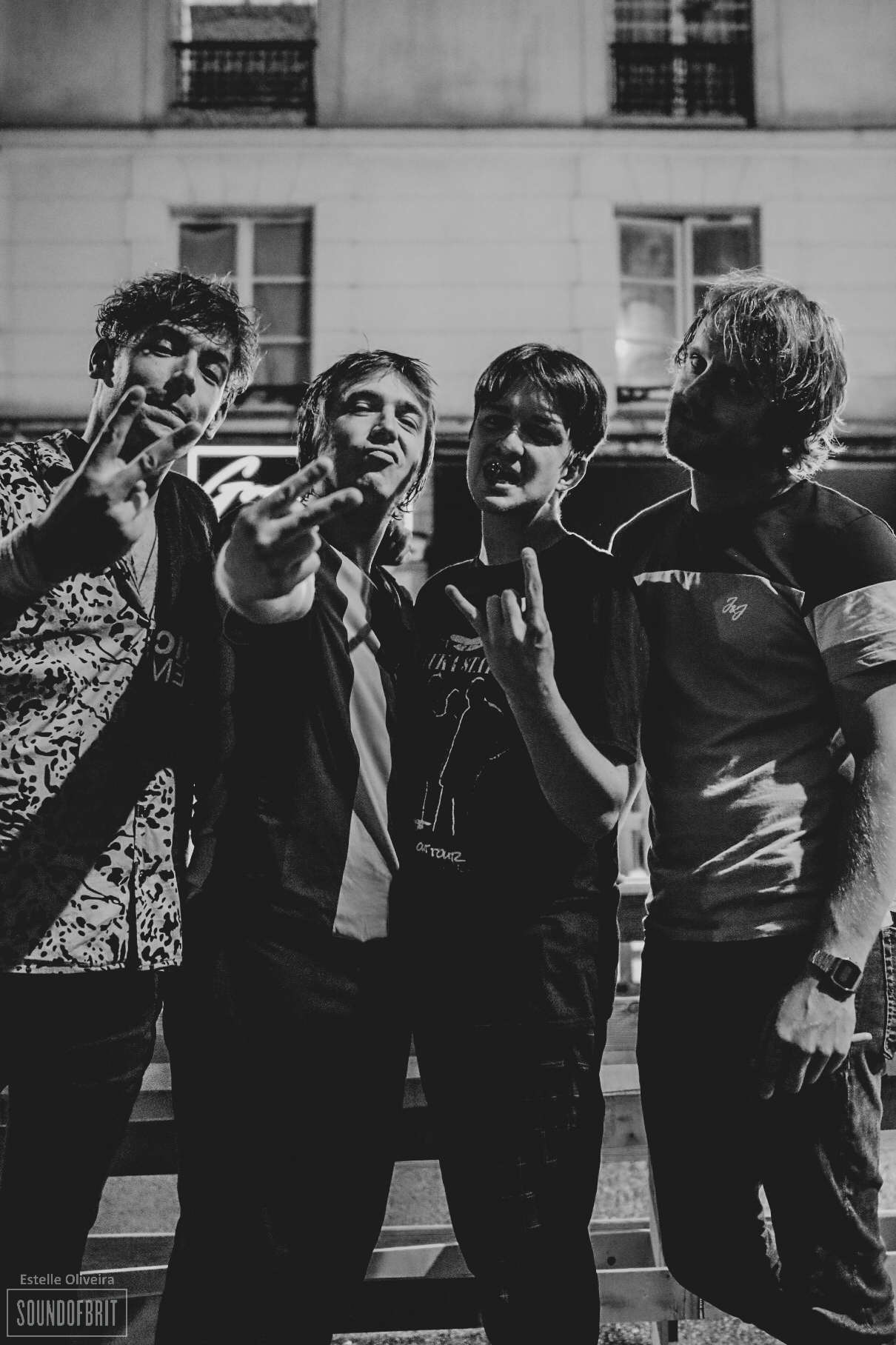 Before their first sold out Parisian show, we’ve met with The Luka State and asked them a few questions about themselves and their great first album – Fall In Fall Out -, under the Parisian sun.

Can you introduce yourself? What is The Luka State?

Conrad: We’re a four-piece British rock’n’roll band from the north west of England. We write songs for ourselves and we’re just glad that other people dig our music. We’re a working-class band, from England and we’re passionate and I think that comes across in our music. The band name means a positive mental attitude. So a positive state of mind, where you only look forward and never look back. We have a saying in England called “tunnel vision” where you’re completely focused on one thing, and that’s what The Luka State of mind is, it’s a state of mind where you’re completely immersed in what you do.

Lewis: I think so yeah (laughs)

Conrad: (laughs) well, we’re sat here with you, aren’t we?

How would you describe your album, Fall In Fall Out?

Conrad: The album comes from being in your early twenties, coming from a working-class town in Northern England where there’s not much to do and a kind of boredom, the feel of isolation gets a hold of you and we found a solace in picking-up our instruments and writing music together and playing music. A lot of those songs are about being in your twenties, in your early twenties and coming from a place like that where rock’n’roll kind of becomes your savior and being in a rock band is the be-all and end-all. (to Lewis:) What about you?

Lewis: No, yeah, it’s exactly it. Like, we come from a small town where there isn’t much to do, so.

Yeah, in your lyrics you seem to spend a lot of time outside, smoking cigarettes and thinking about girls …

Lewis: Yeah, and we needed to find something else to do, other than that so.

Conrad: Yeah, our world revolves around music, football, and… girls yeah. (laughs) I think any young guy from … That’s a national load, I think!

Is tomorrow your first gig in France or outside the UK?

Lewis: No, we’ve done small tours around Europe before but before this, the only time we’ve played in France is we’ve played at people’s houses. There was a point where we just put a message out there, and if anyone wants us to play at their house party, we would happily play. And then someone from Paris got in touch with us so we got in the van and came and played two months later in Paris.

Conrad: I mean but before, prior to the 1999 club tomorrow, we played on Taratata on television, but we’ve not actually done a show yet, so it’s kind of exciting to be here and to do that. For our first show in Paris to be sold out is a dream come true, we never expected it.

It’s a bit early, but will you play festivals in France?

Conrad: Yeah well, obviously festivals season this year is closed but, next year though we’re hoping to be in as many festivals in France as possible.

Do you know any?

Lewis: We would legit play anywhere someone allows us to plug our instrument in!

Conrad: I’m sure we’ll play some festivals next year!

Is there any band from the UK that we might not know and need to discover?

Lewis: There’s a few cropping up on our scene at the minute …. There’s a band called Kid Kapichi. They’re sort of building up. But we meet that many bands on the road at the minute, it’s nice, the England scene is slowly coming back to a rock side. We’ve had years of just grime artists and rap and stuff like that…

Yeah, for example, The Lathums are huge on promotion and they’re sold out before their album has even been released … Do you think it’s a phase or maybe like rock music is really coming back again?

Conrad: I wouldn’t say rock. They’re not a rock band. I’d say guitar music is coming back, and that’s the main thing. As long as there’s people holding guitars, that’s all that matters.

Lewis: It’s been a sort of big pendulum, it swung. It’s gone from being loads of rock music and guitar music, and people switched off from it and moved into grime and stuff people could make in the bedroom. It’s now coming back to people wanting to see four lads on stage, sweating, riffing and rock.

What are your influences?

Conrad: We kind of share the same influences. I grew up first and foremost being inspired by The Beatles, I’m like a huge Beatles fan, but then I kind of discovered The Beatles and I also discovered punk music. Punk-rock music. And that’s how me and Lewis met and bonded over our love of The Clash, The Sex Pistols and The Jam and all those early 70s punk bands from the States, The Ramones, and all those bands. I think also being a kid from the early noughties-late nineties, you also got like, you’re in love with Nirvana, you’ve got Green Day, you’ve got all those American bands also that are our influences. We kind of share a similar melting-pot of influences, don’t we?

Lewis: One of the beautiful things about us is that we all have key interests that are the same, but it also branches off in different ways as well. Each of us aren’t all in the exact same headspace when it comes to writing, one of us might be thinking about “Yeah I like the heavier side of music with bands like Nine Inch Nails” and stuff like that whereas Conrad prefers the popular and the songwriting side. So, we just try to melt it all together into one pot rather than stick to “no we’ve got to sound like The Clash” or “No we’ve got to sound like The 1975”.

Conrad: We could never break-up under influential differences cause we all have the same influences. Artistic differences though …

“Bold” really reminded me of a ballad Green Day could have written!

What do you think about social media in regards to rock bands? About bands not being signed until they reach a milestone in their followers?

Lewis: It goes hand in hand. Cause having a good social media size, we pry ourselves in ways we talk about our families, having a good social media base, that’s to show to the world that we actually care about our fans. There are lot of bands where they’ll have the account but they’re not the ones running it. On ours, if you message our Instagram, most of the time it’s Conrad that will reply or the other lads. It’s all shared amongst us. It’s just a great way of staying in touch with fans like, when people shy away from it and say “no, this is ruining the scene” I think it could be the total opposite. There’s far too many selfies in rock’n’roll now, but the actual being able to reach out to fans, they’re even coming in tomorrow at the 1999. We’ve been speaking to our French fans for years before we even got out there. So we knew that they existed and we knew that one day we’d have to go out and play.

Conrad: I think in regards to social media though, it’s like the world changes every day, so it’s just something that’s we had to do in the music industry, it’s something that happens now, it’s to be accepted, you’re kind of a fool if you say no and don’t do it.

Oasis or The Beatles?

Conrad: (screaming) Oh you can’t ask me that!! That’s horrible.

Lewis: Hmmm… It’s hard, I like both but I don’t count either as being my main influence in life. I’m very much, like, my family are from Liverpool so there’s a very big thing of sort of trying to escape that at the same time. But if I have a couple of beers, I become very very scouse and I have a heavy Liverpool accent. But at the time, it’s not just about one area, we want to be a band for the world, we want everyone to listen to us.

But they were bands for the world …

Conrad: Fucking here mate. The Luka State: a band for the world.

Lewis: A band for the people! (laughs)

To see picture from their parisien show, click here !