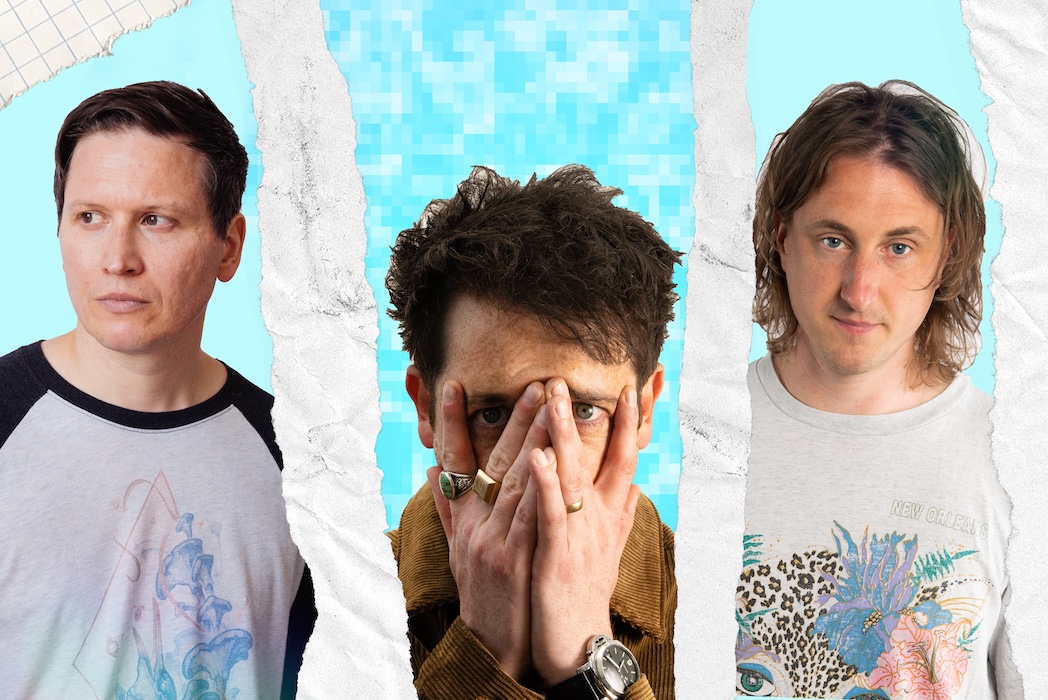 16 Jan INTERVIEW – The Wombats : Murph talks about the new album

The Wombats’ new album, ‘Fix Yourself, Not the World‘ was released last Friday, so we had to ask them about it! We talked with Matthew Murphy aka Murph about its creation. From indie newbies to Tik Tok trends, the band went through many changes and the best is yet to come !

SOB: Hi! How are you Murph? Where are you now?

SOB: We had the opportunity to listen to your new album. Sonically, it seems really different to your previous albums. Why is that?

Murph: It fell like in the demos … Like Method to the Madness, we just got this lo-fi hip-hop thing going on which was something that Todd was definitely listening to and we made it and then … There are some songs where you can really… You know we’ve always loved that kind of 90s grunge/alt kind of thing and you can hear that in there. And the rest, there was just one song that had brass in it and we were like “that’s cool, let’s try and see where we can put brass in the other songs”. There was this kind of David Bowie guitars, some David Byrne’s elements we were trying to bring out and then there was this song like Flip me Upside Down and This car drives all by itself with this kind of early LCD Soundsystem thing. That kind of fell like it was our job to bring those out as much as we possibly could. And hopefully that’s why it sounds a little bit different than the other albums we’ve done.

SOB: Are there any other influences on this album, apart than the ones you’ve mentioned?

Murph: Probably, but I’m not aware of those…

Murph: Yeah, that’s true! I don’t know if the word Kasabian was used but Ian Brown, Stone Roses, Manchester was definitely used. I love that song, I think that’s my favourite! That kind of break beats and really kept me going. I do agree with you about Kasabian, but we were thinking Ian Brown.

SOB: Was the process different? The songs are very different, it’s kind of like a mixtape!

Murph: Yeah, it’s kind of eclectic, but I still think it sounds “together” and “cohesive”, weirdly even more so if we are all in the same room with one another, which we weren’t. I think maybe, you know, Dan and Todd were in London a lot in a studio, and I was out here. Somehow between the two rooms that we were recording in I’ve liked mashed together and given it even more depth and even … I think given the state of the world when we were recording, it’s worked out really well.

SOB: So, the whole recording was done remotely?

Murph: Well, no … Well, to record it, yeah. I was in LA with an engineer and they were in London. Sometimes I was in LA with a producer and Todd was in Oslo and Dan was in London … But you know, for those songs, it was more like Todd recorded some bass, sent it over, Dan recorded drums, sent it over and we put it together out here. Every song was different. Some songs were very easy, some songs were just hilariously difficult, yeah.

SOB: Did you write the songs before that or was everything done remotely too?

Murph: 40% of the album, we wrote in 2019. Dan and Todd came to LA three times and we wrote a bunch of songs, four or five of those got on the record. Obviously, life as we knew it just changed, and I finished up the record in my studio at home. I sent them a load of songs, sent our management team a load of songs, we selected the ones that we liked and came here to record the album.

SOB: You might be excited to play it live together then!

Murph: Yeah well, we played Reading & Leeds festivals summer of 19 and we’ve done some press bits. I just got back from London, we were in London for two weeks doing press and rehearsing the new album.  Hopefully, touring next year!

SOB: Talking about another album, we saw that your song Greek Tragedy went viral on Tik Tok. What’s your opinion about it? How do feel it might help established artists grow a larger audience?

Murph: My opinion on Tik Tok is pretty much my opinion on all social media, which is like it’s amazing and provide such great opportunities for artists and people, anyone really. But it’s just rife with horrible things as well, and you have to have a good understanding of yourself in order to navigate that correctly. I find myself not really using much social media at the moment, personally. Obviously, we have those people doing stuff and I have to record lines and do stuff sometimes. But I don’t know, that old Tik Tok remix happening, honestly felt like it happened to a different band. I have no idea where that influencer got that remix. It was only released in like three European countries; we’d never heard the remix. I still haven’t heard the remix from start to finish. It’s just weird and goes to show you the strength of social media: that anything can happen at any point in time. That’s a really good thing, but that’s also really bad as well.

Murph: Yeah it’s strange! It wasn’t even online, our management was calling the label “yeah we’ve got to upload it!”. It’s just so weird.

SOB: Kind of a good thing too, maybe some people discovered you through this song and will listen to your new album!

Murph: Yeah exactly, it brought a lot of people. But before the Tik Tok thing happened, that was happening anyway on a kind of smaller scale. I was in interviews and people were like “why and how are new people finding your music all the time?” and I was like “I have no idea”. I’d give those bullshit answers as to why I thought it might be happening, but honestly I didn’t know what I was talking about. And then the whole Tik Tok was like someone putting a magnifying glass on those ideas. You know, just growing even bigger. I’m just really grateful that it’s happened and that people discover more of our music.

SOB: On your new album, we can hear some great basslines (Flip me Upside Down; People don’t Change People; Ready for the Eye). Can you tell us who wrote them and how?

Murph: Todd plays bass. You’re talking about basslines? Two of those songs we did out here before lockdown. The thing with The Wombats is that we all play everything to various degrees. Dan is very good at pretty much most things. Todd’s really good at most things and I’m like OK at most things but I’ll do whatever I need to do to get a song out. You know, now, at this point it’s just “go and grab that bass” and it doesn’t matter who’s playing. If someone goes and play drums and that’s not me. We’ll try and get a song out with anything! Give us a tin can and we’ll try!

When we’re writing a song, maybe someone will play one part and someone will play another part. But I don’t really think about who wrote which part, I don’t know … I mean, Todd is the bass player, maybe him, but we all gave him directions!

SOB: Since it’s the end of the year, is there an album this year that you really liked?

Murph: Honestly, I’m the worst person to ask this question to now! I have two kids now and all I’m listening to is like Baby Shark. It’s Baby Shark (dance remix) I guess… I’ve been so terrible with keeping up to date and I feel like any time that I have free, where I could be listening to music, I’m writing it instead. Or I’m trying to get another song out. But there is lots of stuff I’ve been enjoying but I honestly can’t think of it right now.

SOB: Did you rediscover anyone this year except Baby Shark?

Muprh: No, I’ve listened to « Kid A » recently, that was fun and kind of novel. I guess I’ve been listening to quite a lot of Jungle, but that’s just because my wife’s been playing it a lot. I guess that’s something, it was a good album!

SOB: You said you started the process three years ago, what was the outback of your solo project, “Love, Fame & Tragedy” on The Wombats?

Murph: I think the impact was that I didn’t really have a break between “Beautiful people will ruin your life”, “Love, Fame & Tragedy” and this album. It’s just been constantly going. Although it’s been a little bit exhausting sometimes, it means that that kind of muscle writing in my brain doesn’t really get a chance to slow down or shrink. It’s been constant. And I think that it’s obviously helped this album as well. Usually, it would be like write and record an album, tour it, don’t write much when you’re touring it and then you start again. You need a few months to write some bad songs to get things going again. This time I just felt like I was ready to go from the start, because I’d just written and recorded an album, and toured it a little bit. So in that way it was really kind of helpful!

SOB: Did you keep some songs from your solo album for The Wombats?

Murph: No, not for this fifth album. Before “Love, fame & Tragedy” was recorded, I’d started writing… It’s a bit of a blur to be honest, but I didn’t keep any songs back from “Love, Fame & Tragedy” for this or vice versa.

SOB: Is there a question you would like to answer but no one ever asked you ?

Murph: No, I think it’s been good. But fire away, you know!

SOB: Can you sing Baby Shark for us?

Murph: Yeah, in April, hoping it all goes ahead! It would be great!