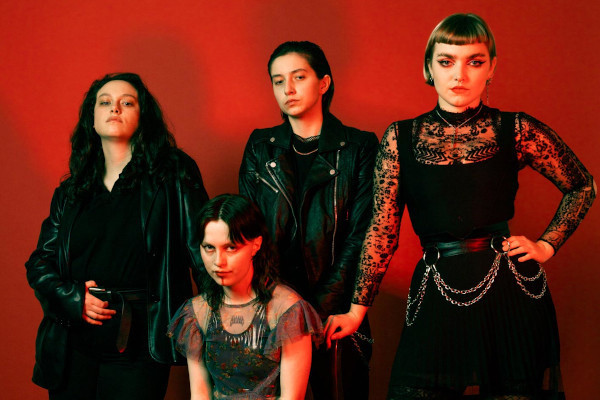 With a name inspired by the hysteria of witch trials in Salem and Europe, Witch Fever is the Manchester band that is about to become the breakthrough of 2022. After multiple singles since 2017, the post-punk quartet released this year their debut EP “Reincarnate”. As they’re about to go on a European tour with IDLES in February, we met frontwoman Amy and guitarist Alisha to talk about their musical environment and the impact of their queer identity on their music.

Any three words that could describe your music?

What’s your aim that you think about when you write music? What do you want people to feel or do when they listen to your music?

Alisha : Empowered, just feel good about themselves. Feel like they hold a power that they didn’t before.

Amy : And I guess just to enjoy it. We’re not really coming with a specific agenda. We just enjoy writing music and we talk a lot about different things that are sort of making us angry.

What are your main influences, not only musically?

Amy : As the vocalist, I write the lyrics. I take a lot of inspiration from horror, film and books and that kind of things. Musically, we all have very different music tastes. They all sort of sit under the bracket of alternative. Although Alex is really into like dance music at the moment. In terms of people that inspire us there’s like Pussy Riot, they’re super cool and inspiring. And then there’s Noname. She’s American, her music is vastly different from ours, but she’s like, really, politically engaged and that’s very inspiring to see.

« Being on tour is just another level. »

What would be your dream collaboration? As in you can dream big.

Amy : Oh, God. For me, probably Pussy Riot. That would be amazing.

Alisha : That would be quite mental to be fair. That’s a really hard question because a lot of the bands that I like aren’t together or they’re dead. Dead or alive Nirvana.

Alisha : Mine is going on tour. Being on the road for three weeks of just like travelling in a shitty little van. But having the best times. Being on tour is just another level.

Have the lockdowns had a positive or negative impact on your productivity in writing and rehearsing? For some people being stuck inside means being productive. For some others, it was the total opposite.

Amy : I think for me, it was the opposite. We had things that we had to be getting on with because we were in the process of signing with a new label. We sort of didn’t have a choice, we had to stay productive, but we couldn’t practice together. And there’s not one songwriter, we all write equally in the band so we all have to be together really. It definitely did slow us down on a lot. Since we came out of the lockdown, there’s just been way much more going on.

You’re also mainly a live band as in the music is very much made to be performed live.

« It might not always be obvious, but my lyrics are definitely always pushed by feminist thoughts. »

Are you more of album people or single people?

Amy : Oh, I hate to say it but I’m more of a singles and playlist person.

Alisha : Yeah, me too. I think nowadays, it’s so much easier to just listen to songs and playlists. For example, 20 years ago, you had to listen to the CD, you had to listen to every song and I think it’s kind of good in a way because, obviously, it’s good to appreciate a full body of work. But now you get to listen to different types of music and artists that you may not have listened to, and discover new genres.

« Queerness is something to be fully celebrated, and my lyrics are never really about celebration. »

Alisha : That’s a question for Amy.

Amy : I think so. I guess in terms of lyrics, I don’t write about politics specifically. If anything, I think my lyrics have a feminist undercurrent. Sometimes overcurrent, if overcurrent is a word. It might not always be obvious, but my lyrics are definitely always pushed by feminist thoughts. As well as my experiences as a woman in a world that is very patriarchal. It’s sort of being angry at oppression of whatever kind that is.

You identify as a queer band and you are in a lot of queer playlists. Has been queer had an impact on your songwriting?

Alisha : Amy could probably answer that better but I do. I mean, I play the guitar! It (being queer) is a very important part of my life and I want to portray  that through music. I guess I can’t really do it in a lyrical sense, but in how I perform and how I appear, I guess.

Amy : I don’t really write about being queer. I talk for me, and I think for the band as well, queerness is something to be fully celebrated, and my lyrics are never really about celebration. My lyrics are usually quite dark, sort of disgusting and difficult. Whilst being queer can be difficult, I haven’t really explored that in lyrics yet. I might do one day, who knows? I think just the fact that we’re open about being queer, and we’re on stage presenting as quite a queer band. Even that, we’re just sort of making a space for ourselves and allowing ourselves to express ourselves however we want to.

We’re approaching 2022. Do you have any new artists that you’re excited to see breakthrough?

Alisha, to Amy : You! There’s a band that you’re going on about.

Amy : Oh yeah! There’s a band called CLT DRP. They’re really cool, queer as well. They’re all rushing away from my head now. There’s also Nova Twins. They’ve broken through now, they’ve done it but they’re really cool. The band called Screaming Toenail, I’ve just found about them. SLAP RASH, from Manchester. There is actually so many, but when I get asked this question my brain just goes blank. Little Simz is already famous but she’s someone I’m excited about right now. Also ZAND, we went on tour with them.